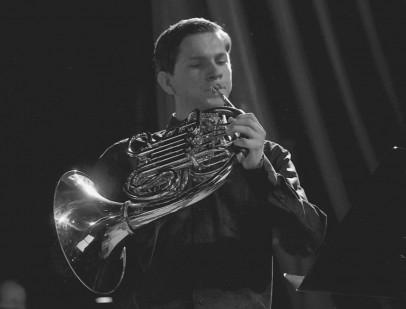 Hugo’s first lessons were with Txemi Etxebarria and Wouter Pletzers, at the royal wind orchestra “De Berggalm. In the last 4 years he has studied at the St. Bernard grammar school in Heerlen, which he combines with lessons from Will Sanders and Willy Bessems at the Maastricht Conservatory.

Hugo has mostly concentrated on orchestral playing so far. In 2010 he was accepted into “Amikejo (LJSO)”. With “JeugdOrkest Nederland” he went on a tour abroad, it gave him several opportunities to play in Het Concertgebouw in Amsterdam. He has also played twice in the royal theater Carr. for television.

In 2016 he played in the project “RCO meets Europe” in the Royal Concertgebouw Orchestra. Hugo has performed as a soloist in the Theater Heerlen and with the wind orchestra St. David Voerendaal, with Maurice Luttikhuis.

He has followed Masterclasses with Peter Houben and Rob van de Laar. Nowadays he writes his own arrangements and conducts frequently.