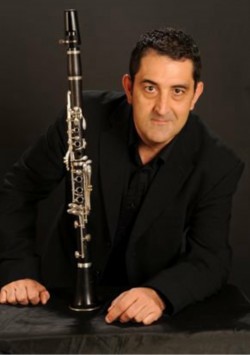 He was born in Benifairo de Valldigna (Valencia, Spain).

He has recorded for RTVE, Cataluña Radio and some CDs about contemporary music (Joaquin Homs, Berio, Angel Oliver Pina, A. Charles…).

In 2004 he performed the world premiere of K. Penderecki’s Concert for five clarinets with Madrid Symphony Orchestra conducted by the composer.

Emilio Ferrando has been member of the jury in International Competition “Valentino Bucchi” in Italia (1999) and in national competitions (Xátiva 2008, Benicarlo 2007) and he is often invited to give master-courses and lectures in several conservatories, youth orchestras, universities and music schools.