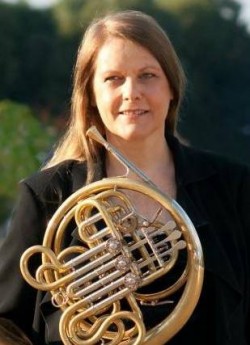 Marie Luise Neunecker, hailed for her exceptional talent and virtuosity, is widely re-garded as one of the leading and most distinguished horn players of today. She has built up a successful international career and is much in demand as soloist and chamber musician. As the Berliner Morgenpost wrote: “The truly royal Marie Luise Neunecker plays the horn with melodic grace and effortless, supple lines, something other horn players can only dream of.”
During her tenure as principal horn of the Bamberg Symphony Orchestra and the Frankfurt Radio Symphony Orchestra from 1979 to 1989, she attracted attention by winning several prestigious international competitions. In 1982, she came first at the German Music Competition in Bonn, a year later at the ARD competition in Munich and in 1986 she received the first prize at the Concert Artists’ Guild Competition in New York. Nowadays, she appears regularly in all major concert halls in Europe, Ja-pan and the USA.
Besides her being a successful soloist of orchestras such as the NDR Symphony Orchestra Hamburg, Gewandhausorchester Leipzig, Konzerthaus-Orchester Berlin as well as the Bamberg Symphonics and the Cincinnati Symphony Orchestra, Marie Luise Neunecker also appears regularly as a chamber musician. She works together with partners like Frank Peter Zimmermann, Christian Tetzlaff, Lars Vogt, Saschko Gawriloff, Enrico Pace, the Zehetmair Quartet and the Petersen Quartet.
György Ligeti wrote his “Hamburgisches Konzert” for Marie Luise Neunecker, who performed its world premiere in January 2001. Since then, she has played the con-certo, which is dedicated to her, numerous times in several countries. She has re-leased it on CD with the Asko Ensemble under Reinbert de Leeuw for the Ligeti Edi-tion of Warner Classics.
Marie Luise Neunecker receives regular invitations from all major festivals both as soloist and as chamber musician. She is a frequent guest artist at the Salzburg Fes-tival, the Schleswig-Holstein Music Festival, the Marlboro Music Festival, the Risör Festival as well as at the Vienna Festive Weeks.
Her numerous CD recordings have not only demontrated her outstanding quality as an artist and her exceptional musical versatility; they have also contributed to a wider knowledge of horn repertory of various epochs. She has released the Strauss Concertos with the Bamberg Symphonic Orchestra under the direction of Ingo Metzmacher and Britten’s Horn Serenade with the tenor Ian Bostridge. Other CD re-cordings include the Hindemith Concerto, Horn Concertos by Russian composers Reinhold Glière, Alexander Glazunov and Vissarion Shebalin and a recording of works by Othmar Schoeck, Charles Koechlin and Ethel Smyth. As a chamber musi-cian she has released recordings of the horn trios by Brahms with Frank Peter Zimmermann and Wolfgang Sawallisch and most recently, with Lars Vogt on piano, a CD with works by Hindemith, Kirchner, Brahms, Beethoven and Schumann.
Marie Luise Neunecker is professor of horn at the Hanns Eisler Academy of Music in Berlin.