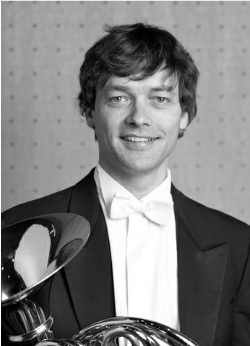 Willy Bessems (born 1964) has taught horn at the Maastricht Academy of Music since 1993.

During his studies with Hub Crüts and Professor Erich Penzel (which he completed cum laude), he was personally selected by Sergiu Celibedache to be the principal hornist for Bruckner’s 4th Symphony during the Schleswig-Holstein Musik Festival. This led to engagements with the Gustav Mahler Jugendorchester under Franz Welser-Möst and as substitute solo hornist with the Philharmonie Essen from 1989 to 1991 and with the Gürzenich-Orchester Köln from 1991. As a result of this he has worked with conductors such as Leonard Bernstein, Paavo Berglund, Dimitry Kitaenko, Markus Stenz, and Gustavo Dudamel.
With the Gürzenich-Orchester, Willy has performed innumerable symphony concerts and opera productions. He has given concert tours in Spain, Switzerland, Russia, Argentina, Korea, Japan, and China, as well as elsewhere. He has also collaborated on many CD recordings, including all the symphonies of Shostakovich and Prokofiev.