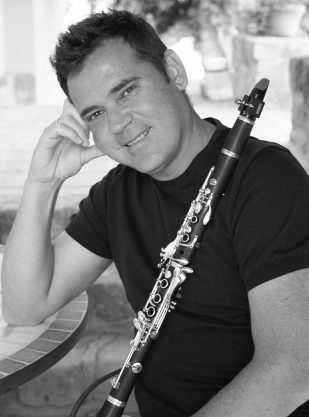 He started his musical education in Calanda Asociación Musical “Gaspar Sanz”, drived by his father great love of music. Later on, he studied at Zaragoza Music Conservatory with Professor Emilio Ferrando, where he graduated with honors in 1993.

In 1995 he moved to Paris to complete his academic education at “Conservatoire National Superieur de Musique et Dance”  de París with Professor Michel Arrignon. He finished the degree in 2000 and was awarded the “First Prize” in Clarinet and Chamber Music. He also took classes from Alain Damiens, Guy Dangain, Florent Heau and Eric Hoeprich.

During his stay in France, Carlos collaborated with the Orchestras from Strasbourg, Rennes, Nantes, among others, and with the IRCAM (L’Institut de Recherche et Coordination Acoustique/Musique) in Paris.

In 1995 Carlos won the place as solo clarinet at Bilbao Symphony Orchestra. Since then, he has appeared as a soloist with the orchestra performing pieces such as  Debussy “Premiere Raphsodie”, Claudio Prieto “Concierto Latino”, Berstein “Prelude, fugue and riffs” and Brahms (Berio) “Sonata n. 1”.

Furthermore, he is a member of the wind quintet “Quinteto Bilbao” holding performances regularly in the BOS chamber music season.

Carlos García has been teacher of clarinet and orchestral repertory at Aragon Music High Conservatory and Leioa Music Conservatory. He has also given courses in places like Lisboa, Zaragoza, Huesca, Alcañiz…

Currently he is head of the Clarinet Department at MMM.