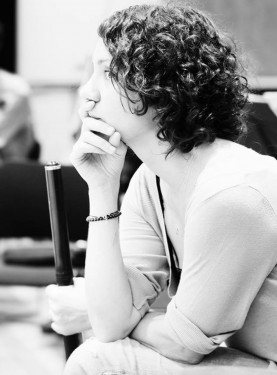 Born in Altea in 1973, conducts studies flute at the Conservatory “Oscar Esplá” of Alicante, in the “Conservatoire Hector Berlioz” in Paris and “Conservatoire National Supérieur de Musique et de Danse de Paris (CNSM of Paris)” with teachers Alain Marion, Raymond Guiot, Sophie Cherrier and Vincent Lucas; also complete their education with teachers Jaime Martin, M.Bourgue, PL Aimard …Honor Award in Middle Grades and Higher, “Premier Prix de la Ville de Paris” in 1994, First Prize at the “Montserrat Alavedra” with Haizea Quintet in 1994, “Premier Prix a l’unanimité du jury” of CNSM in Paris in 1997, First Prize and Special Prize at the ARD Competition in Munich, with the quintet Miró Ensemble in 2001.
He has been part of the JONDE (1992-1996) and Gustav Mahler Jugend Orchester (1997-2001).
Flute soloist with the Tenerife Symphony Orchestra (1997-1999) and the Symphony Orchestra of Galicia (2001-2002); include collaborations with the Cadaqués Orchestra, Chamber Orchestra of Europe, HR Frankfurt, BR München, Rotterdam Philharmonic. All these experiences have allowed him to work with directors such as C. Abbado, D. Harding, P. Boulez, M. Jansons, F. Brüggen, S. Ozawa.
In addition to its activity in orchestra, Julia performs regularly as a soloist or chamber music; chamber music has collaborated with musicians like Gordan Nikolic, R. Capuçon, D. Grimal, G. Caussé, H. Demarquette, F. Braley, R. Vlatkovi?, Diemut Poppen, & nbsp; D. Quiggle, Claudio Martínez Mehner and others and regularly participates in International Chamber Music Festival recently in the United States in the “Charlottesville International Chamber Music Festival”; as a soloist he has performed with the Tenerife Symphony Orchestra, the Orquesta Ciudad de Granada, the Symphony Orchestra of Galicia, the Cadaqués Orchestra, the Symphony Orchestra of Castilla and Leon, with the orchestra “bandArt” St Georges Strings.
Currently a member of the “Mahler Chamber Orchestra” (D. Harding) of “Lucerne Festival Orchestra” (C.Abbado), Ensemble “Les Dissonances” (D. Grimal) also & nbsp; co-founder and solo flute “bandArt” (G. Nikolic).
Professor of flute at the ESMUC (Escola Superior de Música de Barcelona) and the “Superior Conservatory of Music of the Liceu of Barcelona” since 2006.